The A-List? or Treading Toward Pesto...

It has been a crazy week.

I promise to post something interesting before the week is out. Probably another food-related adventure, akin to creating a new recipe for pesto. After all, I have put myself in this predicament. As it happened, last week I marched out to my garden with the intention of saving my beloved bush of basil (the main ingredient) from the impending frost. A fellow co-worker had told me it was coming, and I had decided that I would  make as many batches and varieties of pesto as I could stand in order to see me and my brood through the winter.

However, I failed to realize WHAT, or rather WHOM, I was dealing with.

Not Mother Nature. But me.

And after cutting down all of that FREE green gold (we're talking at least $400-retail-price of the stuff), I marched it into my garage and placed it with care into the second refrigerator that is stored in there. 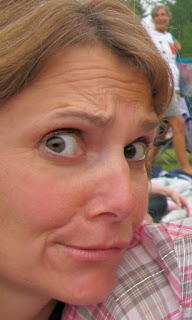 Until I marched back out to that cozy nook of a garage I've got and opened the fridge door and found....

Not the fresh, gorgeous, green basil I had picked the night before.

No, instead I found Frozen-Solid, Stiff-as-A-board, Remnant of basil that I had decimated.

Two whole bags of it.

APPARENTLY, someone, sometime, between this summer and fall, had turned up the dial on my second refrigerator. Spun that little button to high. Set it well on its way down the path of deep-freeze mode. Leading me (consequently) to stuff my poor basil into the resulting ICEBOX.

Yes, apparently, my safe-haven-refrigerator was colder on the inside than it was on the outside where the still-green grass was barely frosted, if at all.

So goes my life.

The good news is, after a bit of a romp I shall have yet another pesto recipe to add to my stack (I have 5, and if I'm nice, I might share one or two). I'll just say that it has been my life-long goal to create a variety of pestos to match all the colors of the rainbow. (5 down, 3 to go.)

Aside from that, I wasn't really intending on talking about PESTO, or BASIL, or my Insane Attempt at Masking my STupidiTY (pointless, I know). What I was going to post about was the new list that my book, The Ghost in Me, has jumped back on to over at Amazon.

It's been a nearly a year since it was listed in the top 100 of the spine-tingling horror titles, but after 2 days of FREE, there it resides, yet again (at least for now on the free list).  For the past little while, The Ghost in Me has been doing the tango with titles on the Drama and Theatre list (it does have the plot line of a theatre production in it); but it's nice to see my little book commiserating with new friends. SEE?

Woot!
Happy Haunting everyone!
And be sure to share this fun book with the little people in your life. :)