About These Things Called Distance and Time

Distance is an interesting concept.

It is intricately coupled with time.

No matter which way you may want to reason, the two are inseparable. Whether you are traveling from point A to point B, or reflecting on your past from where you have come, or pondering where you might be 5 minutes, 2 months, or 15 years from now, it is hard to think of one without the other. Even the act of reading this page involves your eyes moving across the screen, covering distance, and using time to do so.

Another thing that becomes attached to distance is emotional connections -- that is, the relationships we have with people.  No matter what distances we move through in life, we can not do so without maintaining, or creating, or reflecting on the connections we have to people that are important to us. And along with those memories, the emotions we felt in the presence of those relationships frequently rise to the surface.

I find it interesting how memories can bring me back years to a moment that brings joy, gladness, even laughter, no matter how many miles I have traveled in my daily activities since those experiences. It truly seems a both a gift and a profound enigma of the human spirit. How is it possible that the mind can fold back the entirety of distance and time like an accordion and allow us to relive a moment as though it were just within reach?

Certainly I am not alone in valuing the significance and importance of the connections we make in our lives with others. Last summer I read A Voyage for Madmen by Peter Nichols. This book chronicled the journey of nine men who were the first to set out on solo races around the globe, a journey where each sailor could not dock nor set foot on land unless they were to forfeit their race. Not all of them made it. At least one died after losing his sanity, likely in part due to loss of human interaction. Yet one thing I found most interesting was comparing how each man prepared for their journey. It seemed that the degree of each man's success hinged on whether they packed mementos, books, music, radios -- things that would not help them physically survive such a long and dangerous journey through the far reaches of the southern hemisphere, but things that would help them feel connected to people when vast distances would separate them from those they loved most. It has since occurred to me that perhaps the mind has the capability to shelter us in some sort of fantasy whenever it's needed -- the wayward wanderings of the mind can take us to wherever we need to be at any moment in time.

I can't imagine having to spend a year alone on a small boat with nothing but an endless ocean stretching to all horizons. While I enjoy sailing, I don't venture out without company -- the best part of the experience is having significant others along for the ride. So trying to understand the mentality of the solo globe-racers was most difficult for me.

It all comes back to distance. It's something that is so tangible in some respects, such as that with the pavement beneath our feet, and yet so intangible that its true nature can barely be perceived for what it is. Distance, as it is perceived from one individual to the next, really must become a personal concept -- truly imagined and intertwined within the inner workings of the mind, where it becomes layered with its own set of emotions and its own set of rules regarding the interpretation of time.  Folding and unfolding and refolding again, while inexplicably strengthening the bonds we have to those we love while letting others go. I suppose our interpretation of the scale of the world around us depends on what we allow ourselves to believe.... where it is that we want to be and where it is that we feel we must go.

No matter whether you are a physicist tackling the location of the outer boundaries of space, or a writer simply musing as words fill space on a page, I believe that at any given moment in time we likely find ourselves connecting to others who are both within and beyond our reach. The curiosity of it all is how that unfolds in our daily activities. Are we trapped by distance? Are we trapped by time? Our are they constantly rolling out in front of us, along with a list of infinite possibilities wating to be reached. 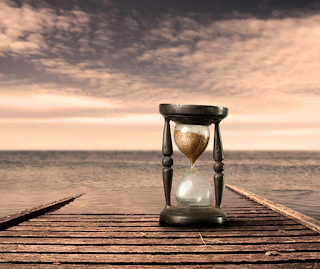