There are so many different types of signs.

Stop signs.
Street signs.
Warning signs.
Signs of love.
Signs of hate.
Signs of the times.
Good signs.
Bad signs.
Hand signs.
Plus signs.
Reading-between-the-lines signs......................
It seems to me that there should be a rule that when you come across one--at least, a really important one--then, some sort of instructions should come with it. Kind of like a sign with the sign. An interpretation. An explanation. A footnote.
Because I've been told SO many times that the Lord, and Fate, and Karma, and WhoKnowsWhatElse work in mysterious ways. And usually, those works are shown in signs. The Trick is knowing when you're getting one, or seeing one--a real-live, relevant sign from some other Power That Be. It all seems so nice, doesn't it? So comforting. So-glad-to-know-someone's-looking-out-for-me.
The problem is, that throughout the course of the day, or the week, or the month, or the year, I'm bombarded with signs. Some of them I follow. Some of them, like this one, I shouldn't (long story). 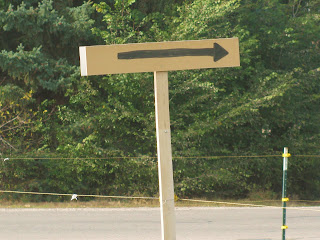 But I worry that most of them--the ones that might be worth noting--I probably just miss. And the ones I do come across, I don't know what what to think about, or if I should think about them at all. Like the crystal blue forget-me-not found on a bench, or the flying 50-pound chimney cover that missed my head by an inch.
I guess it shouldn't matter. Some signs are easier to follow than others. And if someone IS looking out for me, planting signs, some of which I see, and eventually, I end up in the places I'm supposed to be, then maybe I don't need those directions with the signs, afterall. Maybe I'll just settle into being comfortable, bumbling along, enjoying what it means to be me.
Posted by Shaunda at 8:16 PM No comments:

Email ThisBlogThis!Share to TwitterShare to FacebookShare to Pinterest
Labels: advice, just for fun 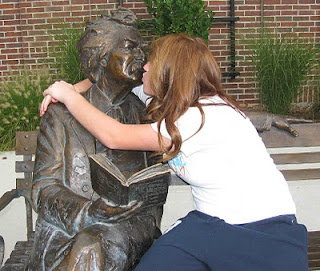 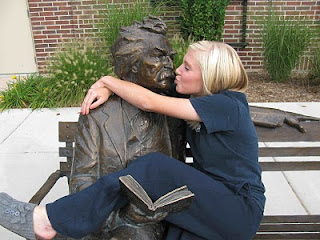 I guess it's only fitting that these latest escapades happened while I was at a writer's retreat deep in the mountains somewhere near a place called Wolf Creek. Obviously, Mr. Twain was not in attendance given his current occupation in attending to other distractions..... 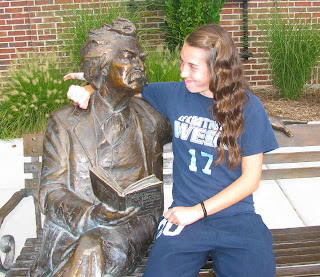 Stay tuned. More details to follow, as they become available....
Posted by Shaunda at 9:30 PM No comments:

Through a child's eyes

Recently, my son and I were having some sort of discussion centered on what we would do if we could do anything. Our ideas were far-flung. Learn to fly like a bird. Swim like a dolpin. Sail the world. Eat a billion gallons of ice cream.

Then, of course, I got silly and decided to dream smaller. More tiny. Focus on something I could nearly pinch between my fingers. Rather than wish for something as grandiose as sailing the world, I'd just get one freckle removed. Specifically, I'd get rid of the small blotch above my right eye. An age spot I seem to have acquired after finding too many ways to have fun outside.

My son looked at me like I was crazy. "Why would you want to do that?"

I asked why he was concerned--if he was worried I might actually get rid of it. If he'd miss that freckle when it was gone.

In all the times I've spent looking in the mirror, getting ready for work, or wondering how I might lighten that blotch, I never realized there might be something good about it. Something to like. In that moment, as simple and trivial as it may seem, I actually felt better about myself. Some say I wear my heart on my sleeve. I never thought I might being toting a tiny bit of it above my right eyebrow.

Later, I began thinking about the pure and beautiful outlook kids have for the world.... What if more people made the effort to see things in a better light? Find the good in bad situations? Find the good in others and then share that opinion?

What if we didn't assume people whom we care about knew all the good things and reasons we have for liking them? What if we voiced those thoughts? Wouldn't that goodness go forth like a ripple?

Maybe life really does come down to the little things. Maybe changing the world for the better or helping people heal inside and out doesn't really take so much effort. Maybe it just starts with something as simple as telling someone you like that divet in their forehead, the curve of their smile, or that constellation of agespots streaming their way over their eyes.
Posted by Shaunda at 3:40 PM No comments: