On Jane Austen and the Art of the Duel

So how do you get a man who is prone to watching movies of conquest and conflict, and which often involve victors yielding guns or swords or cannons, to watch Jane Austen's Emma?

Well, it helps if the man comes home late while you're already in the midst of watching another classic, Thomas Hardy's Far from the Madding Crowd, which happens to involve one man yielding a sword, another yielding a gun, and a third yielding a shepherd's hook -- or pitchfork -- depending on the farm chore of the day, and which also happens to involve the death of at least one of them as they all pursue the heart of one woman.

After "the man" respectfully sits through what is left of Hardy's twisty-turny classic, in which some men win and some men lose in various sorts of fashion, it's possible to convince this "significant other" that although Emma does appear to be another match-making, who-will-end-up-with-whom, nail-biter, it will indeed end with a duel at the end. Someone will get hurt. Love is like that, right? 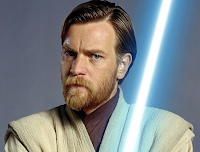 And I suppose I should mention that it especially helps to get the man into believing this potential plot-sequence, if Obi-Wan Kenobi is playing one of the potential suitors in the Emma drama. You know who I'm talking about -- Ewan McGreggor -- who starred as the saber-yielding jedi in Stars Wars 1, 2, and 3 (a.k.a The Phantom Menace, etc)?

And so, when the man-who-shall-go-unnamed commented that Obi-Wan was playing a dude named Mr. Churchill, I went along with it. And when this comment was followed by the question, "Doesn't this movie end in a duel? after one of them starts swinging a sword - or maybe it was a walking stick, I couldn't help but assure the man that yes, yes, it did. Someone will meet their maker. Love is dangerous that way.

It probably also helped that a couple weeks ago he found me watching another well-known and interesting Jane Austen classic, Pride and Prejudice and Zombies. With all the blood and gore,  I suppose he found it tolerable. Personally, I thought the breaks taken by the actors for cups of tea to brood over who-liked-whom between scenes of zombies losing their heads and eyeballs and other body parts were quite charming. And given Jane's early interest in writing satire, I think she might have liked it. 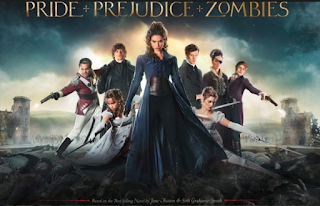 If you love Jane Austen, you can't blame me for taking advantage of a man with a one-track mind when it comes to finding movie entertainment centered around warring parties. I simply stepped in line and wore the hat of a sleeper agent, or a mole, or whatever it is that they call misleading behavior these days. I have no idea. Although I can say I knew well what I was doing, and I was enjoying the process. Plus, I guess if one person in particular got really upset about it, I could easily mention the fact that Winston Churchill, a well-known war person, said Jane Austen's books helped him win his own war. A REAL one.  No joke. You can read about it here.

All in all it was an entertaining evening, filled with entertaining scenes. Do you remember the fish bowls teetering on precarious towers in the garden? They should have given PETA nightmares. 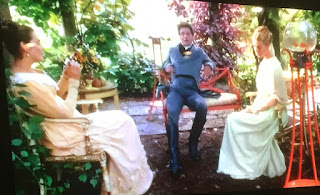 But the best part of the evening was the growing look of confusion on one man's face as the end of Emma neared, and the happy couple on the screen ended up happy, married, with no one dying in the process. "It's over? That's it? No duel??"

Yep. A glorious happy end to another Austen classic, and all the while, winning the hearts of men, one trick, one step at a time.
Posted by Shaunda at 8:19 PM 1 comment: