A Mother, A Vote, A Voice. A Mother's Day book review

Sometimes a book comes along that becomes both timely and timeless from the moment it sees print. The book from Emmy Award-winning journalist and author Elisa Boxer and illustrator Vivian Mildenberger, The Voice That Won The Vote, is just that: Timely and Timeless. 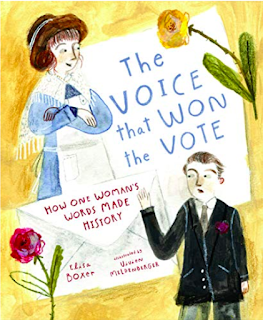 I believe this story and message will resonate with readers - young and old - through generations. More than that, this book's connection to Mother's Day is coincidental to the timing of this post, which makes it even more special!

To begin, look at the inscription written by Elisa in my copy: 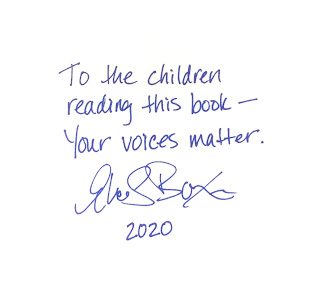 When I got The Voice That Won the Vote, I intended to bring it to my favorite elementary school library -- the one my children had attended so that it could be shared with hundreds of children year-after-year. However, the effects of COVID-19 began rattling our world before I could put my plans into motion, and I've had to put off bringing it to the school until it reopens.

Despite that delay, I'm so excited to be able to share this book here, along with some background information from Elisa Boxer herself, so that perhaps you'll be inspired to find a way to share this book with the children in your own family and community. Here we go!

1) There were many people involved in promoting change for a woman's right to vote--an effort that spanned at least 72 years according to the timeline provided at the end of your book.  How did you find and settle on this particular story? Were there any other people or events that also caught your attention?

You're so right, Shaunda.The women's suffrage movement was nearly seventy-five years of meetings, marches, rallies and dedicated focus to freeing women from "political slavery," in the words of Harry Burn, one of the book's heroes. People are pretty surprised when I tell them I found this particular story with a Google search! But it's true. In 2018, my agent let me know that the 100th anniversary of the 19th Amendment ratification was coming up in two years, which is about how long it takes to get a book published. He knew I was passionate about women's rights, and was wondering if I might like to write a book about it. I knew the turnaround would be tight, so I immediately began searching for a story.
I've always been drawn to unsung heroes. So I literally did a Google search for "little-known figures in the women's suffrage movement." Eventually, I found the story of Febb Burn, the mother who saved suffrage with the letter she wrote to her son. I couldn't believe no one had written a book about her. She was basically just a footnote in history. I was immediately drawn to her courage, and I knew this was a story I wanted to tell.

2) What kind of historical documents did you find in your research? Were quotes that you shared in your story hard to find?
As a journalist, I really geek out over old newspaper clippings, and I hit the jackpot with the Knox County Public Library in Tennessee. A librarian there led me to an online treasure trove: The actual scrapbook that belonged to Harry Burn, the Tennessee lawmaker who tipped the scales in favor of women's suffrage, based on a letter he received from his mother. He had clipped and saved dozens of newspaper articles and headlines from his historic vote in 1920, and that's where I found most of my primary-source information.


3) Is there any significance for yellow roses as being chosen to represent a woman's right to vote?
It actually started with the Kansas state flower, which was the sunflower! Back in 1867, when women's rights activists Elizabeth Cady Stanton and Susan B. Anthony were in Kansas lobbying for women's suffrage, they chose the sunflower as the symbol of their fight. The Kansas referendum didn't end up passing. Still, in honor of the sunflower, the women's suffrage movement that same year adopted the color yellow as its symbol, but they switched the flower to a rose. That's when it started appearing on pins, sashes, etc. But Kansas hasn't forgotten about the sunflower! This year, in honor of the suffrage centennial, people in Kansas have been planing thousands of "suffrage sunflowers" around the state.
4) Have any other mothers helped shaped history?
Sojourner Truth and Harriet Tubman immediately come to mind: Two mothers who escaped slavery and helped lead so many others to freedom. In fact, as I point out in my author's note, the women's suffrage movement actually had its early roots in the abolitionist movement. Many women who wanted so badly to speak out against slavery found their voices silenced. They began to realize the importance of making their voices heard in all areas of society.
5) Any final thoughts about voice, votes, or mothers you'd like to share with young readers?
I really hope this book helps inspire kids to know just how much their voices matter.
And of course, as I tell my son, the moral of this book is that you should always listen to your mother :)
And for the mothers (and all parents) teaching their kids at home, here is a free, downloadable educator's guide to go along with the book. It includes activities in reading, math, history and social studies: https://sleepingbearpress.com/products/11847/teaching_guides
If you'd like a signed, personalized copy of the book shipped to you, grab one here, from my local indie:
https://www.printbookstore.com/preorder/boxer
Or if you'd rather order from somewhere else, drop me a line at boxerelisa@gmail.com and I'd be happy to send you a signed bookplate. One of my favorite quarantine activities has been answering letters from kids around the country, so if your child has any questions about the book, or would like a letter, email me for my address!

Shaunda, thanks so much for having me here to talk about the book. And Happy Mother's Day, everyone!

Happy Mother's Day to all!

And yes, we should listen to mothers everywhere. :)

I'm a mother, and I say, this book brightens our world.

Get yourself a copy and another to share! It's wonderful.