7 Days, 7 Books, Day 6. The Most Perfect Thing in the Universe by Tricia Springstubb

We're back from the holiday break with a look at middle grade titles that combine a seamless interplay between story and STEM. 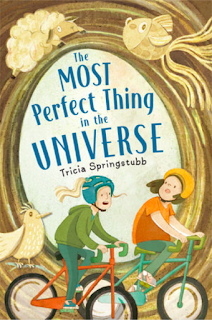 The Most Perfect Thing is the Universe by Tricia Springstubb is about a girl named Loah who worries her mother cares more for an endangered bird than her own daughter when she decides to extend her two-month birding expedition in the Arctic even longer. Loah's situation gets worse after her elderly caretakers fall ill, but then Loah finds a new friend named Ellis who needs some saving of her own. The two girls discover ways to not only rescue each other, but also Loah's mother.

Although the loah bird that is highlighted in the novel is not a real species, the rest of the birds that essentially play as background characters in the book are real, as well as the facts that are woven into the story about them. This beautifully written novel will likely encourage young readers to learn more about birds--nearby and far away. 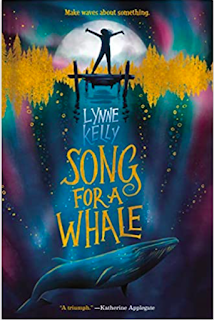 Song for a Whale by Lynne Kelly is the story of a deaf girl named Iris who develops a strong connection to a whale that can not communicate with other whales because it is a hybrid of a humpback and blue whale. The unique pitch of its song does not match either species, and therefore, the whale cannot be heard. Because Iris fixes antique radios by touch and feel of the sound vibrations, she wants to use her skills to find a way to play a song that the hybrid whale can hear so that it knows it is not alone. This quest takes Iris on a journey far from home.

What I love about Song for a Whale are the tidbits of information that are knitted into the story, from the nature of sound, to the building of radios and transmission of sound, to ecology of oceans and threats to whales and other marine species. This novel is another engaging story that will inspire readers to forge their own connections with wildlife species.

The next two books in my TBR pile are We Dream of Space by Erin Entrada Kelly and Look Both Ways by Jason Reynolds.

After that, I'll be looking for new STEM-based middle grade novels with boys for main characters. If you have any recommendations, I'd love to hear them.