Trials and Tribulations of a Loose Tooth

Okay, so living through the experience of loose teeth has never been dull in this household. From dealing with a daughter who would not pull or tug on any of her teeth until they were hanging by mere threads to coping with a son who would rip them out with fingers, or pliers if needed, at the first signs of them being loose, I'm now left with shielding the youngest of the three from their antics.

I've always hoped for a happy medium with him. Unfortunately, I don't think I'll get that. Since the older brother no longer has teeth to lose in his mouth, guess who he's turning his teeth-ripping skills on?
You guessed it. And said young son has fell victim in the past. And right now, that son has a loose tooth. And although he would very much like it out of his mouth, the memories of loosing his last tooth still burn a little too brightly in his mind. And mine. 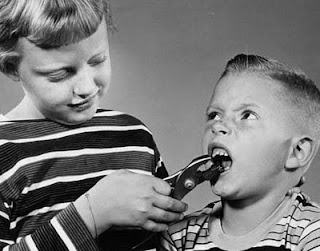 I mentioned pliers. And I was totally serious, although my olders son's fingers have served pretty well without them as a pair of vice grips when it comes to pulling a tight tooth. This son has also resorted to other adventureous tactics--tying strings to the bathroom door, then slamming it shut with his foot (it worked on the second try--although why and how he would have repeated this feat a second time after a failed first attempt, I have no idea). And those strings remained until the doorknobs were recently changed out. There have also been heavy objects launched off the top of the stairs (tied to his tooth, of course). And who knows what else. His younger brother's fingers, I think.
Anyway, I mentioned the last tooth extraction of my youngest son. He'd had a loose tooth, and his older brother found out about it. An older brother, who knows the ins and outs of the capitalistic advantages of the tooth fairy. So, when the youngest complained about his loose tooth, he said, "Let me get it out for you."
At first, his younger brother refused, but after a bit of prodding along the lines of, "You want money, don't you? Then lie down on the floor and let me pull it out!" he finally agreed to have some help. Help that began with him lying on the floor and offering up his mouth, while his older brother straddled him and started pulling.
Yes, he pulled. Pulled and yanked and pulled some more. And he didn't stop, even though his brother writhed in pain and screamed for mercy.

Finally, the tooth yielded. My older son held it up with pride, asking, "Did I get the right one?"
The younger could only hold his mouth, and nod, and hope that he had.
"Then, that'll be a buck, please."
Yeah. The older, magnaminous brother charged his younger brother a buck. A fee for his services. Which could be paid after the tooth fairy's visit.
How much does she usually leave? A buck.
Ah, my enterprizing young sons....
We'll see what happens this time. Since my youngest has come to me many times in the past 24 hours about his tooth, I kind of get the feeling that he wants me to take care of it. He probably thinks I won't charge him.

Good thing I got that new tool kit from my folks this year. I might have my first opportunity to dig into it.
Posted by Shaunda at 12:28 PM